Acid Reflux: Are we throwing out the baby with the alkaline bath water?

Alkaline diets, alkaline water, alkaline human tears and pretty much anything else the misinformation industry could get their alkaline hands on has been touted to improve everything from vitality to cancer. Most of the claims surrounding alkaline water or anything related are usually totally outlandish. Acid-base balance is very tightly regulated in many different tissue specific contexts. However I want to touch on some research with alkaline water in the context of acid reflux that I think deserves some further study. (Fun facts: I was joking but just so I don’t spread misinformation tears usually hover right around a neutral pH of 7 but tend to be more alkaline later in the day and human skin ranges from slight to moderate acidity).

Acid reflux is a particularly troubling disorder (or group of disorders) in which gastric fluid flows back into the esophagus and provokes symptoms or complications and impairs quality of life. The pathogenesis of reflux disease is multifactorial, involving transient lower esophageal sphincter (a bundle of muscles responsible for allowing the contents of your esophagus to receive passage into the stomach and prevent it from coming back up) relaxations and other lower esophageal sphincter pressure abnormalities resulting in a reflux of acid, bile, pepsin and pancreatic enzymes which lead to esophageal mucosal injury. Other factors contributing to the pathophysiology of disease include hiatal hernia, impaired esophageal clearance, delayed gastric emptying and impaired mucosal defensive factors. So why should you care about the pathology and the disease in general? Well, other than the fact that it is extremely prevalent (estimates around 20% in the western culture) and painful, it also increases the risk of adenocarcinoma of the esophagus. Now the fastest growing cancer in the United States. The leading hypothesis is that the increased prevalence of reflux (which tends to track with obesity) is the main driver of the increased rates of this cancer.

So what the hell does this have to do with alkaline water? Well, I’m getting there. So, regardless of the upstream reason for the reflux there is agreement that the pathogenesis at the level of the esophagus involves acid and pepsin (a proteolytic enzyme present in the stomach). The refluxate which contains pepsin may become tissue bound and be destructive to epithelial structures through the digestion and shredding of cells and cell surfaces. Pepsin is active in acidic environments and inactive in more alkaline environments. Pepsin has maximum activity at pH 2.0 and is inactive at pH 6.5 or higher. Although pepsin is inactive at pH 6.5 and above, it remains stable/undenatured until pH 8.0. This is meaningful because it implies pepsin can be dormant in the human esophagus and then be reactivated at a reduced pH. Pepsin is stable for at least 24 hours at pH 7.0, at human body temperature and retains 79% +/- 11% of its original activity after re-acidification at pH 3.0.

Here is where alkaline water comes in. Ingesting water at a pH of 8 or greater can potentially quickly denature pepsin bound to the esophagus, ameliorating the risk of reactivating pepsin through another reflux attack or possibly through ingestion of very acidic food such as lemon, vinegar, pineapple etc. The instantaneous denaturing of pepsin in vitro at a pH of 8.8 has been tested using artesian well water containing natural bicarbonate (pH 8.8). Pepsin was denatured in Evamor water, but not in pH 7.0 water, and peptic activity at pH 3.0 following dilution in Evamor or in phosphate-buffered saline solution of pH 8.8 was not significantly different from that of the control with no pepsin. This exemplifies, at least in vitro, that protein breakdown is totally halted if preceded by very short exposure to a pH 8.8 medium. 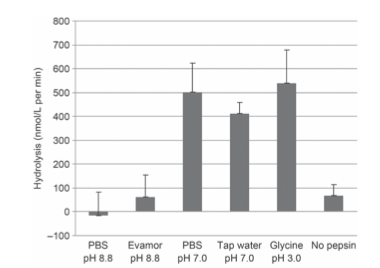 As for more robust clinical evidence, well, as of yet we don’t have much. There is however a growing signal. One retrospective cohort analysis (which came with significant risk of bias and had a diet component) did show improvements in acid reflux symptoms and quality of life. We also have a single arm pilot trial in which 50 participants were instructed to drink alkaline water with each meal and throughout the day as they wished. Participants showed clinically significant improvements in frequency and duration of reflux symptoms, along with no issues in tolerability. While we do not currently have evidence of the highest quality it does seem sufficient enough to warrant a rigorous further look with a randomized controlled trial. Presumably such a trial would not be extremely expensive.

What about current therapies for Acid Reflux? If you do not need surgery the major current therapy mainly consists of proton pump inhibitors which reduce the pH in your stomach and are generally effective but are not without risk, albeit generally low risk. Evidence is fairly weak or shows low prevalence when concerning meaningful adverse outcomes, but the preponderance of the literature cautions against underestimating risks and overprescription of PPIs. Some common concerns are; increased risk of fracture, diarrhea, allergic reactions, hypomagnesemia, kidney disease, and B12, iron, and calcium deficiency.

So what should one do in the meantime? At present, in the absence of very compelling evidence (hopefully some will come soon) it would be prudent to tread with caution when considering stopping traditional therapies indefinitely and going with alkaline water. However, in individuals who are motivated to do so, experimenting with alkaline water in conjunction with physician approval and monitoring seems like a low risk option.